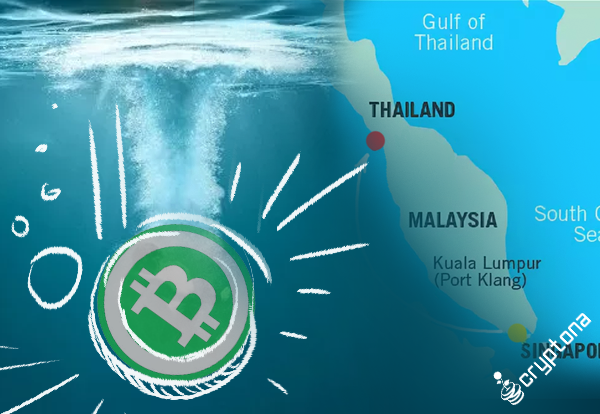 On Monday night, a group of 600 cryptocurrency fans set sail from Singapore for their second annual Blockchain-Cruise. Then, Bitcoin’s price was standing above $13,500. The group included mostly young men, who had become very rich after the huge surge of cryptocurrencies the last year.

When their ship reached Thailand on Wednesday though, the leading cryptocurrency’s price had fallen close to the level of $10,000. Despite their potential losses, the attendees didn’t show signs of panic or disappointment. The party continued as normal.

The founder of Standpoint Research, Ronnie Moas was one of the speakers at the event on Wednesday. He has become famous in the industry due to his precise Bitcoin predictions. Regarding Bitcoin’s drop, he explained that there is nothing that goes up in a straight line. Also, he commented that in the best possible scenario, Bitcoin could climb up to around $300,000 in the next 7 years.

Among the cruise’s list of speakers were Jose Gomez (a former assistant of Hugo Chavez), Kaspar Korjus (the leader of the e-residency program of Estonia) and John McAfee, the antivirus program developer. Currently, he is a crypto evangelist on social media. He was made a headline speaker by Coinsbank, the wallet operator and cryptocurrency exchange that organized the event.

Further, not every conversation at the event was about cryptocurrencies. The attendees discussed a lot about blockchain, the distributed ledger innovation that can improve industries such as finance or health care. Finally, Moas and other speakers motivated the audience to donate some of their wealth to charities in order to reduce global inequality.

Mr. McAfee blamed the fear of the government’s intervention on the recent crypto market’s downtrend. In addition, he explained that they cannot ban a distributed system. People will find a way to come back.